This post is not about Atheism per se, but more about how we will sometimes, many times, engage in some truly insane thinking.

There was a secret government operation known as A119 which was a plan to blow up a nuclear device on the Moon to impress/scare the Russians.

The news media is covering this as our plan to "blow up the moon" but I seriously doubt that 1950s nucelar devices could have done this.  In fact the bomb they planned on using was about a tenth of the size of the one dropped on Hiroshima.   Though this is how we get Space:1999.

Who was one of the people that pointed out that this plan was, well, insane?  Carl Sagan.

Listen to the Scientists people. They don't always know better, but at least they know WHY they know what they know.

Posted by Timothy S. Brannan at 9:05 AM No comments:

Watched the Discovery Channel special Mankind Rising.
It was interesting, nothing I have not seen or read before, but still interesting.

What is interesting is the number of science denying idiots out there talking about it.
Over at Twitter the hash tag, #mankindrising is generating a lot tweets.

Most are the ones to be expected. A bunch of quotes from Genesis or proclamations of faith.  As if shouting louder would make their side more right.

Sorry. Doesn't work like that.
Though with Twitter it is interesting to see how people respond in real time.  I have never really used Twitter all that much, but I think I need to pay more attention to it.
Posted by Timothy S. Brannan at 9:36 PM No comments:

Email ThisBlogThis!Share to TwitterShare to FacebookShare to Pinterest
Labels: Christians are stupid, education, evolution, internet, the bible is wrong, TV

You know what argument makes my blood boil?

It isn't even an argument  It's an excuse.  Worse it also shows how fundamentally ignorant the person I am talking to is.

Evolution is a Theory.  A scientific theory supported by multiple hypotheses, data, observation and yes experiments.  We do know what it would take to disprove the Theory of Evolution.  Scientists look for those sorts of things all the time, but they have not found them. Not once.

Gravity is also a Theory.  We know it works. We know how it is applied and can make observations, collect data and run experiments that confirm the finds and data.  We DON'T know WHY it works.  We know the more massive an object is the more "gravity" it has.  We know that there is a time dilatation effect the further you are removed from gravity.  Astrophysics even uses gravity to hypothesize about other things like black holes, extra solar planets and even parallel universes.  But Gravity is still "just a theory".

I was explaining this to my two kids today.

For something that is "just a theory" it has an awful lot of power.  Here is the thing, like I said, we still don't know 100% how gravity works.
Our understanding of the mechanics of Evolution is much better. Do we know how it got started? Not that I know.  Can we see it working? Every-freaking-day.

So the next time someone says "it's just a theory" I am tempted to say "GONK."

Posted by Timothy S. Brannan at 7:26 AM No comments:

"But you can't prove me wrong" is one of the most disingenuous arguments you can ever use.  It is the equivalent of saying "I know what you are but what am I!"

It is an argument I hear a lot.

First off it always used when someone wants to argue about things that happened that the believe that happened outside of the observable perview of science.  Like the origin of the universe, or life or geological deep time.  Now let's be equal in our honesty.  I don't know how the universe got started.  I have read some great theories, I have even read some great evidence to support those theories but at the end of the day I don't know.  That is not the same as say we will never know or that it is unknowable.  Lots of things that people once considered unknowable are pretty common knowledge today.

Science is is looking into all sorts of things. They observe and when they can't the devise new ways of observing.  When we hit the limits of what we could see with the naked eye Galileo invented the telescope.  A tool that in a very true sense was a death sentence for him (he was confined to his home for the rest of his life).  I can now buy a telescope a thousand times better at Wal-Mart for under a 100 bucks.   When telescope reached it's limits even when they got bigger and more powerful we used radio telescopes and x-ray telescopes.  Even that wasn't enough so we started launching the things into space.  All the time asking ourselves "What's beyond this?" and coming to "I don't know".

"Not proving it to be wrong" though is not science and you can't show anything that way.

I can say I have a best friend named Harvey.  I can provide you with all sorts of "Evidence" to support my claim and really you can't prove me wrong.  Sure you could follow me around for the next 5 years to see if I interact with Harvey, but I can still say "you have not proved me wrong".

Now say I make the same claim of my great grandfather who died almost hundred years ago.  HE had a best friend named Harvey. You can't follow him around now.  But you can't prove it wrong.

The issue here is "you can't prove it wrong" is not an argument.  It's a dodge, it is there to fill in for what we really have to say and that is "I don't know".  Scientists say I don't know all the time.  Sometimes it is even "Wow! I don't know!" and it's followed by "Let's find out!"

I am not sure how the Gap Theory (which is not really a scientific theory at all) has a null hypothesis.

So I have to ask.  What would need to be true to make the Gap Theory false?  For it to be a good theory then there needs to be an answer to this question.

What would need to be true to say prove evolution false?  That is is EASY. Find a newer form of animal below an earlier one in older rock strata.  Show me a fossil of a bunny that is older than a fossil of an Eoraptor. Do that and the whole theory of Evolution goes back to square 1.  Show me a rock that floats and you do the same to the theory of gravity.

Email ThisBlogThis!Share to TwitterShare to FacebookShare to Pinterest
Labels: blogs, the bible is wrong

I know Thunderf00t was given a Klingon style discommendation over at FreeThought Blogs.
And maybe there were good reasons for that.  I am not here though to talk about those now.

I am here to talk about  his series "Why Do People Laugh at Creationists".

He still makes a lot of great points in the 38 video series.
I still think it worth watching.

Also somewhat shunned by the atheism-internet cognesti is The Amazing Atheist.   I will admit it, I like him too.  Yes he has also had his issues with others but sometimes I want to turn to the faithful and ask them "why are you such a fucking moron!!! Fuck! you are stupid!" but I don't do that here.  He does.  And he offends people along the way.

One of those people is Laci Green, though she talks more about sex now than atheism. I like her too.  I like her style of video.   Laci does not like the Amazing Atheist and he doesn't seem care one way or the other.

I also like Christina Rad, who I am just discovering.

Since they are all "Talking head" videos I can watch, or rather listen, to them at work.  I feel like I am learning something.  Have I learned anything?  Well. It seems there is an odd symbiotic relationship between vloggers.  They tend to watch each other, talk about each other and react to each other.    Even if I didn't know all the background drama you can tell that there is something going on just behind the scenes.  This is no different than it is with bloggers, except the emotions are a bit easier to read.

I also like that these vloggers are out there helping to spread the message of atheism and skepticism to wider audience.

I don't always agree with them all on every point, but that is fine really.

I don't celebrate on the anniversary of someone's birth or death after they are dead.
I remember their life, I think about how they touched mine, but don't expect long drawn out posts on it from me. 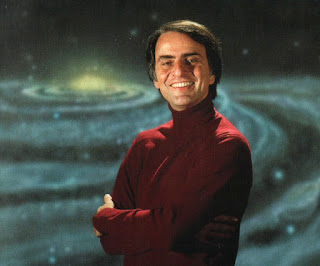 For the longest time he was why I was interested in astronomy, math, physics and yes eventually psychology (Broca's Brain is still a favorite of mine).

Today is the anniversary of Carl Sagan's birth.  I don't say birthday, since obviously he not having anymore.

It is also Carl Sagan day.

I talked a lot about him back in April, http://freedomofnonbelief.blogspot.com/2012/04/s-is-for-carl-sagan.html, but honestly though I really can't say enough about the guy.

I have been tempted to re-read "Demon Haunted World", maybe one of the best books on science (as opposed to a science book) I have ever read.

My lament is that he could not have lived longer.  His cogent and critical voice would have been much appreciated in the last couple of years.  I do take solace though  that we still have Neil deGrasse Tyson around.

I was going through Wikipedia's Lists of Atheists.

And I was surprised that there were so many names on the list of people I already had respected them or their work.

This got me thinking.  Would your knowledge of someones beliefs change how you appreciate their work?

So note the poll on the right.
The question is: Would your enjoyment of something be lessened if you knew the person who had created it was an atheist?

I also have only two possible responses, yes and no.  If you want to get more detailed post it below.

Now obviously this question is directed much more at the theistic members of my audience.  As atheists we don't often get the chance to say yes to material created by theists.  I will post that question at a later date.

I am sure it does not need saying to readers of this blog.  But I will say it anyway.

It is not just your right, it is your civic duty.