101 Reasons Why Evolution is True

Interesting page on 101 reasons why we know evolution is true.

We should not have to explain this, but yet there it is.
Still, this is a very interesting list.

Posted by Timothy S. Brannan at 8:00 PM No comments:

Email ThisBlogThis!Share to TwitterShare to FacebookShare to Pinterest
Labels: evolution

I will admit that I am on the fringe of the Atheist movement.  While I do my own thing and that often coincides with other peoples own thing I am not "part" of the inner workings.

I have known about the issues at some of the conferences and I have read the blog posts, except for the most recent batch.

The American Atheists has just released their Sexual Harassment Policy statement and you can read the text here:  http://atheists.org/conferencecodeofconduct

Personally I am glad to see these in place.
I do not see them as limiting or anything of that sort.  These rules are common sense and frankly should not need to be spelled out, but there you go...

I am happy to see the bit about keeping the strong fragrances down.  As someone with severe allergies I appreciate this one.

How the World Sees Us

I like to watch BBC News.  It gives me an unfiltered view of US politics and world news, free from the lens of US political interest.  The antidote to too much Fox News and MSNBC.
It is nice to see how the world views us, even when most of the times that view is unfavorable.

We all know that there are certain states in our union that are populated with mostly idiots. Well one such state, Louisiana is using the Loch Ness Monster and Godzillia as a means of "disproving" evolution.  Now if this home grown idiocy was bad enough, to make it worse they are talking about it in the Scottish press and laughing at ass.

Great.  Now a much of backwards creationist idiots in Louisiana are making the rest of us look stupid.

Last night was my birthday so we went out to my favorite sea-food restaurant.

That is not the subject though of my post.

We parked next to a car that had a bunch of bumper stickers on it like "Don't Mess with Texas" and an old George W. Bush sticker.  They also had a sticker, a newer one, about "Protecting Religious Freedoms" and it had a bunch of little crosses on it.  No Stars of David, no Islamic Crescent Moons, certainly no Pentagrams.
The understood message was "Protect MY Christian Religious Freedoms".

Christians have a warped sense of reality.  They are the most numerous religion in the country with members in 100s of millions.  Yet they also want to pretend they are an oppressed minority.
It's not that they all woke up and said "hey, I am going act like whiny baby because I am not getting my way anymore."   They have lived in a world of Christian Privilege for so long they have no idea what being a repressed minority actually is.

While the sticker made me groan (it is SOOO bad for you that you can drive a nice car and eat at this expensive restaurant) it also made me smile.  If they feel they are being attacked then the atheist movement is having some effect.  Sure there are other religions also making the poor little Christians feel all scared, but the bottom line is research is showing they are fewer religious type of any stripe and more secularist, atheists and skeptics in this country.

And that is a good thing.

I think I want to make a "Don't Mess with Atheists" sticker.

Email ThisBlogThis!Share to TwitterShare to FacebookShare to Pinterest
Labels: politics, War on Religion

A couple of new blogs in my blog-roll today.

Zinnia Jones and Ashley Miller.
Both over at Free thought Blogs.

I knew of Zinnia Jones since we have a number of friends in common on Facebook.
Ashley Miller is new to me, but looking forward to seeing what she has to say.

Of course I can't help but think that all the cool kids are going over to FtB and I am stuck here in the ghetto of Blogger.   But I can't really complain.  In truth it is good to have atheist voices all over the internet.  It would be too easy to ignore all FtBs but out here in the hinterlands I can still do my thing.

Plus, and to be honest, I have never had the issues with Google or Blogger that others have had.  They let me do my thing and they leave me alone for the most part.

So stop by their new blogs and welcome them.

Email ThisBlogThis!Share to TwitterShare to FacebookShare to Pinterest
Labels: blogs 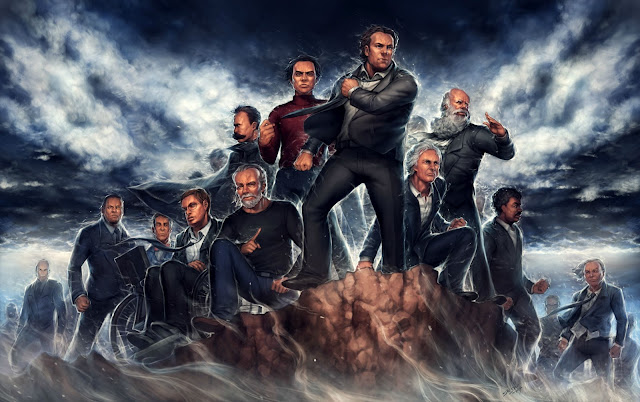 You can see the original and the artist here: http://saejinoh.blogspot.ca/2012/05/champions-of-reason.html

Posted by Timothy S. Brannan at 7:30 AM No comments:

There's a Little Black Spot on the Sun today

If you follow science news (and if you follow this blog, I am sure you do) then you know that Venus is making an historic trip across the sun.  The last time this century. 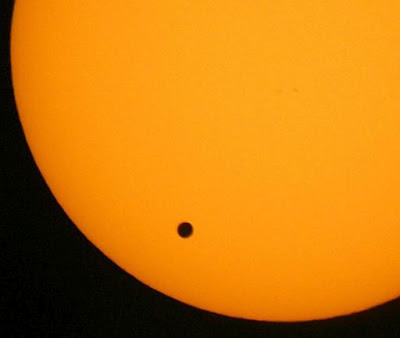 It's not just that Venus is doing it.  We are all lined up in such a way that we can see it.

I recall reading about the Transit of Mercury back in the late 70s early 80s.  For those of you keeping score at home you know that this is also the same time of my atheist self-awareness.

I can't help but connect the two.

The Copernican Model of the Solar System was revolutionary for a number of reasons.  It helped explain why Transits of Mercury and Venus can occur for starters, but it also took in all the data we had and explained the observations we could make.  It did it all by throwing out one basic assumption. The assumption was that the Earth was the center of the Universe.

This assumption, while observational, was given biblical weight in the passage of Joshua 10:12-13 which talked about the Sun and Moon standing still.  I got into an argument with an adult at the time about this. Again she came from the point of view that if it was in the Bible it had to be true and all other evidence be damned.

Again this flies in the face of not just  Copernicus, but 450 years of data collection after that.  And much before that two since there were Greeks in 250 BCE that also knew this and I am sure the Egyptians and the Chinese astronomers also knew this (but I would have to double check).   What do these all have in common? They never made the Earth-centric assumption.

If we apply this same logic to other fields of science we see once again that once the bible is ignored then fields of evolution and cosmology do quite fine on their own.  It is only when people pull in this ancient text that has already  been shown time and time again to be in error that we have a problem.

So please, enjoy this once in a lifetime event and enjoy knowing that reason can explain why it happens and no supernatural forces are needed.
Posted by Timothy S. Brannan at 10:37 AM No comments:

Email ThisBlogThis!Share to TwitterShare to FacebookShare to Pinterest
Labels: science, the bible is wrong

Better to be thought a fool...

A couple more of the faithful acting like fools.

Normally I would ignore such mindless dribble.  After all, it's not news when a baby drools or craps their diaper. Why should I care when a couple of Christians do the same?

Well there is one issue.  What if, say for example, I said "All Christians need to be deported" or "Jews don't exist because Darwin said so."  Well I had better make sure my address is unlisted then.

I would not say those things though, why? Because they are stupid things to say.

Just like these two bozos. Should bozo be capitalized?

Anyway, is this more of that Christian love I keep hearing about but have never seen?
Posted by Timothy S. Brannan at 7:08 AM No comments:

I am having the only sort of existential crisis an atheist can have.

I am a voracious reader.  Always have been.  I drove out of my way several miles this weekend while on errands to stop at two different used book stores.  I am on Amazon, B&N and DriveThruRPG every day.  Most days I buy something.

To have my library card expire and then WORSE, not be able to renew it because I didn't have proof of my address is just too much.