Save Me White Jesus!

So this picture showed up on Pharyngula today. 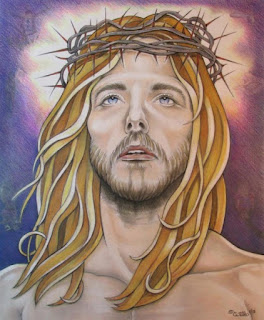 Again, it would be better to laugh if so many didn't take it do serious.  Not taking Jesus serious, but White Jesus.

To start off I know this is sub minority of Christians out there. Plus many Christians probably would agree with me on all of this. Or most of it.

I can recall having a conversation when I was younger.  I am not going to say with whom, it was too long ago and they could have changed their minds by this point.  But the conversation basically went along the lines of them telling me that since Jesus was God's son he therefore looked more like god and thus blond hair and blue eyes.  I remember asking if this person was getting Jesus confused with Superman.

I can also recall sitting in the library at college and looking some of this stuff up.  Yes, there is scholarship where people go to great lengths to explain how this 1st Century Jew would have looked like a member of the Aryan Brotherhood, or at least like a less-Disco BeeGee.

Ok, Ok, I know poking fun at Victoria Jackson is like picking on a child, but ignore her and read the crap posted about the picture.

There are two big issues at work here.  Both of course are denied by the people that partake in this.

Issue 1, Racism.  This is the easy one.  While the defenders (and you can read this all for yourself) will say that they see Jesus as some sort of shapeshifting Pooka that changes to fit who is worshiping him, it is really about white Americans being uncomfortable with a guy that probably looks more like a stereotypical cab driver than anything else.   It's just racism pure and simple.

Issue 2, Stupidity. Sorry this is also the big one. Not only is it racist, it's also stupid.  I mean honestly do they really expect us to believe this shit?  Back to the scholarship above, a lot of the claims are based on what sort of lineage Jesus had.  Hmmm Did they all miss the fact that by tracing this all through Joesph they are missing the big picture? According to the tale, Mary was a virgin and Jesus had no biological relationship to Joesph or anyone in his line. So they can't even keep their own story straight.

Both issues only serve the same one goal.  To make this group of Christians a laughing stock.  Really.
To other Christians, you should cull your herds a bit more.  Their stink will rub off on you as well.
Don't like it?  Well remember that the next time you lump all atheists in with Stalin.

Though I have to admit there is one other Jesus meme that cracks me up so much I can't stop laughing long enough to even take it serious.  You think White Jesus is bad?  Allow me to introduce Super Mega Fighting Jesus! 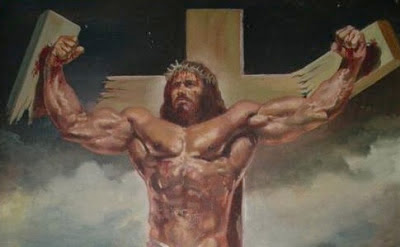 I can hear it now like a bad movie sequel.  "It's the Second Coming and Jesus is Pissed!   This time there will be no forgiveness "  You can almost hear the the wood splintering.
Posted by Timothy S. Brannan at 12:05 PM