I will be honest. I don't like religions.
When religions are used to keep a group of people down just because of how they were born it makes me livid.
Many (not all) Christians used to do it African slaves, they (again many, but not all) still do it to gays and lesbians.
And Many (but not all) Mulslims do it with women.
Granted there is a lot of cultural issues here that are hard to tease out of the religious ones.  But if the religious ones were removed then the culture would adapt.

Case in point, Amina.
This 19 year old Tunisian woman posted a topless photo of herself with “my body belongs to me, and is not the source of anyone’s honour” written on her chest.  She has been threatened with death by her family, police and there are religious leaders asking for her stoning death.

Seriously if your religion is so fucked up that it can't stand the sight of a woman's bare breasts then get the fuck off of the same planet I am on.  Seriously.

There are a lot of blogs talking about this, but here are some good links.
http://freethoughtblogs.com/maryamnamazie/2013/03/21/4-april-2013-international-day-to-defend-amina-she-represents-us/
http://freethoughtblogs.com/maryamnamazie/2013/04/03/on-4-april-we-will-breast-them/
and a facebook group, http://www.facebook.com/femens.tunisie?fref=ts
The main site for protest is here: http://femen.org/

And as an extra special fuck you to any religious group that might be offended here is Amina's picture. 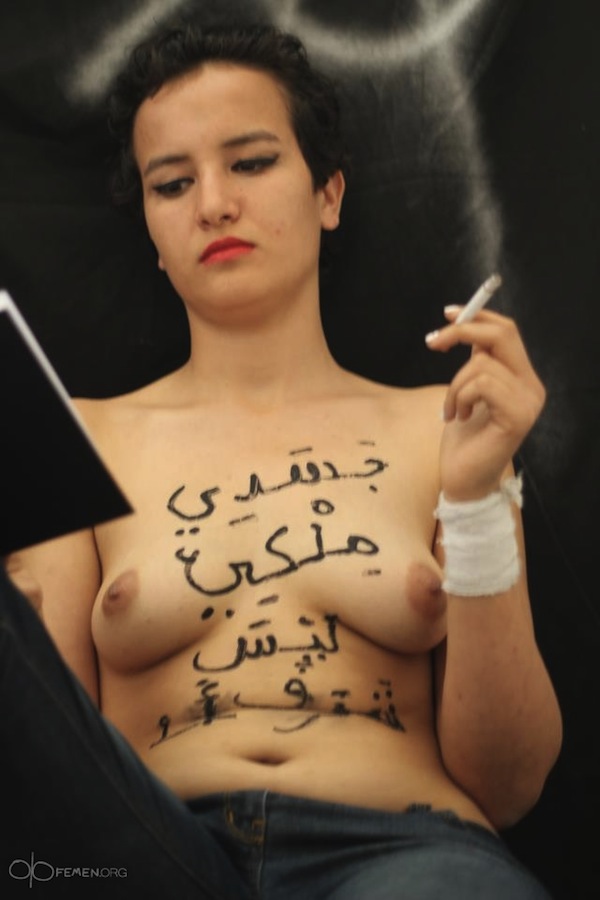 Email ThisBlogThis!Share to TwitterShare to FacebookShare to Pinterest
Labels: blogs, feminism, religion is a mental illness