Towel Day: That About Wraps it up For God 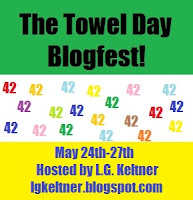 Today is Towel Day! A Celebration of the life of Douglas Adams.
This is also the Towel Day Blogfest!

Today I want to talk about Douglas Adams the atheist.   Adams had described himself as a Radical Atheist, he was also best friends to Richard Dawkins another famous atheist, but I never knew that back when I was young.

When I was 13-14 I discovered a wholly remarkable book, The Hitchhiker's Guide to the Galaxy.  It was funny, clever and so very British that I fell in love with it.  It was perfect for my teenage mind then; living on a steady diet of Doctor Who, British metal and TV.

As I got older I learned more about Douglas Adams.  Of course I knew the Doctor Who connection, but later I learned he and Richard Dawkins owned the first Macs in England. He introduced Dawkins to the woman that would be his wife, Lala Ward aka Romana II.

He was involved in computers, he was on Monty Python he was an advocate of science, technology, environmentalism and he was an atheist.

Reading his books made me happy, they made me realize that the thoughts I was having as a teenager were just ok, but certainly a sign that I was a hoopy frood that really knew where my towel was.

I am currently rereading The Hitchhikers Guide to the Galaxy now.
It is every bit as great today as it was in the 1980s.