Somethings from my own little corner of geekery:
http://karinacooper.com/rage-warnings-she-was-asking-for-it

Then there was this little gem about cosplayers, ie women (mostly) that go to comicbook/fantasy cons dressed as their favorite characters. I think it is great that women are interested in what has been to date a predominately male-centric hobby.  But not everyone agrees.

Comic book illustrator Tony Harris doesn't like cosplayers. Here are some links, you can read them.

If there is someone in fandom and you don't like them or think they don't belong there then the trouble might be with you, and not them.

Following me so far?

We have had the same battles in Atheism and Skepticism.   (Remember "Elevator-gate"?).

The problem is this is all the same thing.  The systemic devaluation of women in society.
It's not a male-rights thing or something like that. No one is trying to stand up for something they want or need.  This is about keeping a certain class of humans down.  In this case, women.

Overreaction?  No. Not really.

See we have built a culture here where women are treated like sex objects. Look no further than the recent Steubenville rape trial where one of the guilty rapists claimed he didn't even know what rape was, or the victim's mother stating that their daughter was used like a toy.

I am not saying someone can't be sexy, or have sex appeal. At all.  I am saying that we need to start treating each other better than what we have been doing.
In fact "sexiness" isn't even the issue.  A woman (or a man for that matter) should be able to walk down the street in ANYTHING or NOTHING and isn't "Asking for it" any more or less than any other circumstance. 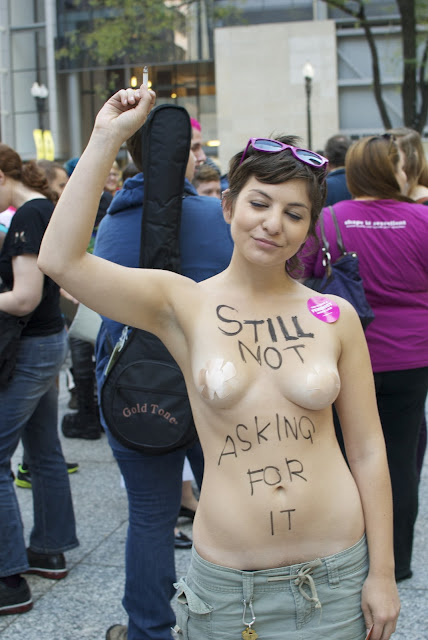 Who is this woman?  No idea. But she is brave as hell.

I love the look on her face. Strong and confident.  She could be covered head to toe and with that look still more confident than anyone else there.

Could that pic be considered "sexy" of course it is. But message matters. The message here is "don't judge me by how I look. Judge me by my actions and words."  Same with the Cosplayers. Same with Kato. Same with Jane Doe in Steubenville.

And then who is to blame?  The victim. At least that who gets blamed by the media, courts, people involved.
https://twitter.com/search?q=%23steubenville&src=typd
http://publicshaming.tumblr.com/
http://rogercanaff.com/site/2013/03/media-rundown-on-steubenville-from-thinkprogress-org-its-her-fault/

and so many more that it is making me ill reading these responses.

All I can do really is raise my kids better and ask you all to do the same.
The rest of humanity seems pretty fucked if you ask me.