SB 10 and the Culture of Blindness

I know I have been going on a bit about Illinois SB10, aka the Gay Marriage bill, and not Atheism, but this is my blog after all....

Anyway I just got this letter back from Rep. Tom Morrison, 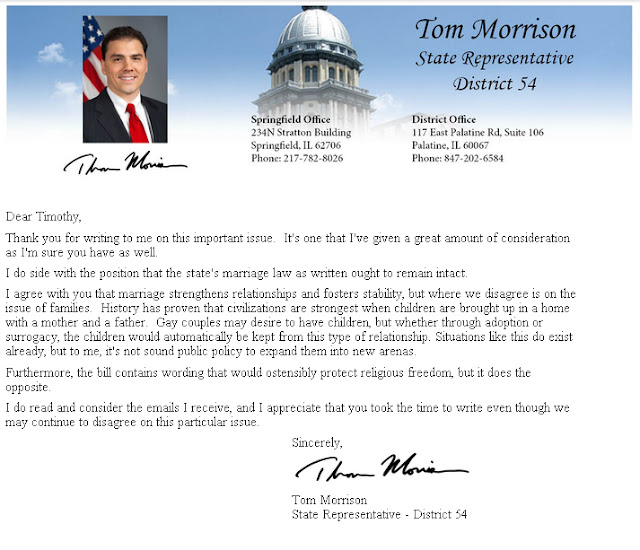 Well I thanked him for emailing me back but I think it is obvious (to me) that he didn't really read my letter.

While I don't want to come off as smug on this, I do think that Marriage Equality in Illinois is only a matter of time.  If not now, then in a few years.  Certainly a generation.  While I am sure that Rep. Morrison believe he has the best of intentions he is letting his religious belief get in the way of his civic duty. He is putting his on comfort over the rights of others.  One day we will look back on these days the same way we look back on the South in the 1960s with civil rights.

I still say email your representatives in Illinois.  You can find them here.
Let them know how you feel.

This is another case of religion denying another group of people their human rights.

Now while I will grant Rep. Morrison the benefit of the doubt in terms of whether his vote against human rights is hate-motivated, the Illinois Family Institute gets no such pass from me.  They keep referring to this bill as the "faux marriage" bill or the "counterfeit marriage" bill.  There is nothing but hate on their site.  They are even designated a Hate Group by the Southern Poverty Law Center.

I say please use their own "Take Action" center to email your reps to let them know that your support this bill and you do not support the IFI.