I don't ask for much really, but if you are going to argue for creationism please at least do your homework.  Failing that at least look it up on Wikipedia.  (Banana on Wikipedia).

Here is evangelist and creationist Ray Comfort and Kirk Cameron.  I believe combined they know less about science than most 2nd graders.


See this is exactly why I don't take creationism seriously.  Well, one of the many, many reasons, but let's talk about this one.

So Ray here holds up a banana as the perfect example god's design.  Except that the banana he is holding was designed by people.

This is the banana as it occurs naturally, 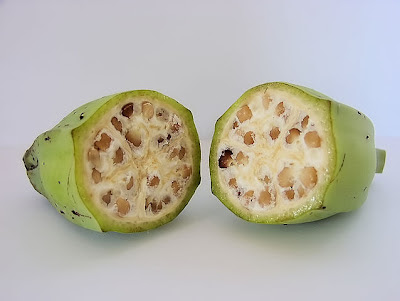 It's a near inedible, fibrous mass full of large, hard seeds.  If this was "designed by god as a perfect food" then god hates us.

The point here is this.
We live in a fascinating world full grand, and sometimes sublime, human achievements.

The modern banana is one those grand and sublime achievements.  Not made by a supernatural agent, but by humans over thousands of years of selective breeding, of trial and error, of science.  WE designed the perfect food for US.   And, here is the important part, all of this is documented.  We know it.

To look at, well any of our food, and assume it has always been like that is not just near-sighted folly, it's laziness and stupidity.

Why didn't Ray "Banana Man" Comfort just go look up banana?  Did he talk to anyone that grows them?  Did he talk to a biologist about where they come from?  Either he did or he didn't.  If didn't then that is laziness and points to a strong tendency just to accept the world as is and not question things.  If did and choose not to believe it, then that is just stupidity in the sight of overwhelming data.