J is for Penn Jillette

I have been a fan of Penn & Teller for a very long time.  I recall watching their act on David Letterman when they let loose all these live cockroaches and trying to catch it anytime I heard they were on. 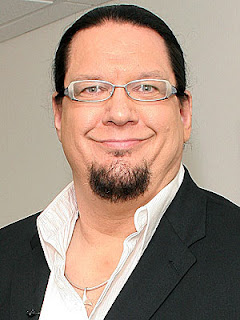 I love their show Bullshit! on Showtime (it is one of the reasons I still have Showtime to be honest) and generally speaking I find them entertaining.

Penn Jillette though is quite entertain on his own.  Plus he is a quite vocal atheist.
That is why he is my subject to for J.

Penn is an interesting guy.  He never smokes, drink or does drugs.  He claims that there is enough in the world now that could cloud his perceptions he wants to be able to always trust what he sees, hears and thinks.  Extreme? Maybe, but more power to the guy.

He has his own You Tube channel, Penn Point, where he takes letters and gives his opinions (and shamelessly shows off his iPad).
He does have a few talks on Atheism, here, here and here which is cool.

I do want to read his new book, God, No!: Signs You May Already Be an Atheist and Other Magical Tales.  The book looks great and he promises it is a fast read.  Give the stack of stuff I need to read I might wait till it is out on audiobook (June 5, 2012).

Penn will be the first to admit he doesn't know something or even that he might not be the best person to speak for atheists since he is not a scientist and he says "fuck" a lot.  But maybe that is why he is a good  spokesperson.  Don't get me wrong, he is not subtle nor is he even for the beginner atheist, but he is worth the time.
Posted by Timothy S. Brannan at 7:28 AM

Email ThisBlogThis!Share to TwitterShare to FacebookShare to Pinterest
Labels: A to Z Challenge, people, TV