S is for Carl Sagan

Growing up as an atheist in a predominantly overwhelmingly christian town was not an easy task.  I was already at a disadvantage of being small, asthmatic, a science geek and a Dungeons & Dragons player.  Add to the fact that I didn't believe ANYTHING that was being told to me didn't help (it was also why I left the Boy Scouts, but is for another day). 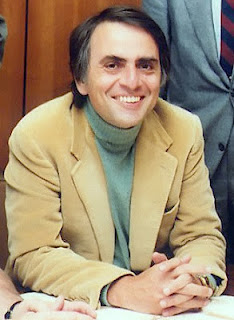 What made it all better though was the fact that I had discovered "Cosmos" on PBS and Dr. Carl Sagan.

Carl Sagan was not an atheist he was agnostic.  For while there I was also agnostic, mostly due to his arguments for it, but also because he was the scientist I wanted to be.

He was eloquent, intelligent, and it seemed to me, a polymath on many many subjects.    He had his own personal issues (married a three times) but I never felt that this got in the way of what he was to me; an example of an intelligent, good person that had no need for a god in his life.

Since Cosmos first aired and I watched it on PBS, I have seen it a half a dozen more times and read the book twice.

Sagan was until Hawking one of our best scientists turned authors to get science into the popular press.
He has written a number of books but these are my favorites.
The Dragons of Eden, Broca's Brain, Cosmos, Pale Blue Dot, and The Demon Haunted World.  Outside of Cosmos my favorite one is Demon Haunted World.  A book that is just as true today as it was nearly 20 years ago.

I never became the scientist like Carl Sagan, I became a different sort.  But it was Carl Sagan that showed me that there is wonder in the natural world, there is beauty in the universe and even in the human spirit and none of these ever needed a god.

Monday I want to talk about Sagan's heir apparent.
Posted by Timothy S. Brannan at 11:53 AM